“If the members of a local community want their community to cohere, to flourish, and to last, these are some things they should do:

1. Always ask of any proposed change or innovation: What will this do to our community? How will this affect our common wealth?
2. Always include local nature-the land, the water, the air, the native creatures-within the membership of the community.
3. Always ask how local needs might be supplied from local sources, including the mutual help of neighbors.
4. Always supply local needs first (And only then think of exporting their products, first to nearby cities, and then to others.)
5. Understand the unsoundness of the industrial doctrine of “labor saving” if that implies poor work, unemployment, or any kind of pollution or contamination .
6. Develop properly scaled value-adding industries for local products to ensure that the community does not become merely a colony of the national or global economy.
7. Develop small-scale industries and businesses to support the local farm and/or forest economy.
8. Strive to produce as much of the community’s own energy as possible.
9. Strive to increase earnings (in whatever form) within the community and decrease expenditures outside the community.
10. Make sure that money paid into the local economy circulates within the community for as long as possible before it is paid out.
11. Make the community able to invest in itself by maintaining its properties, keeping itself clean (without dirtying some other place), caring for its old people, teaching its children.
12. See that the old and the young take care of one another. The young must learn from the old, nor necessarily and not always in school. There must be no institutionalized “child care” and “homes for the aged.” The community knows and remembers itself by the association of old and young. .
13. Account for costs now conventionally hidden or “externalized.” Whenever possible, these costs must be debited against monetary income.
14. Look into the possible uses of local currency, community-funded loan programs, systems of barter, and the like.
15. Always be aware of the economic value of neighborly acts. In our time the costs of living are greatly increased by the loss of neighborhood, leaving people to face their calamities alone.
16. A rural community should always be acquainted with, and complexly connected with, community-minded people in nearby towns and cities.
17. A sustainable rural economy will be dependent on urban consumers loyal to local products. Therefore, we are talking about an economy that will always be more cooperative than competitive.”

I’ve never really liked the term ‘intentional community’ to be honest.  I’ve always felt that it was some dirty hippie re-branding the term ‘commune’ first into ‘compound’ and now into ‘intentional community’.  But as I thought about what the house was, and what it is transitioning into the term grew on me.  Personally, I think that the house should be called “The Cincinnati Chapter of the Branch Davidian Cult” but everyone else said, ‘Nah’.  Whatevs.

Let me start with a brief history of the house.  For the past few years it’s been a share house with individuals renting out rooms and sharing the common areas like the kitchen, bathrooms, etc.  Everyone in the house is different in their own unique way, with their own points of view, and their own stuff going on like work, school, and friends.  The common thread amongst everyone in the house is simply that they all live in the same rental property.

But, what if you could change that?  What if you were able to get like-minded individuals all together?  I’m into gardening, living off grid, and all that green stuff.  What if we could bring people like that together; where we’d compliment each others’ way of living and provide support and optimism to some things that people think is weird (like collecting rainwater and filtering it into drinking water).

So,when I talk about re-seeding the front lawn with native wild grasses, or when we’re unplugging the fridge (this house’s single biggest user of electricity) and storing our perishables in a cooler in the cellar, I don’t get googly eyes like I do from most everyone else ever that is presently living in America.

I suppose all of that is just a way of saying that rather than living with strangers, you can live with people who think about things the way that you do, who want to live simply, and who like to do the same things that you do.  That’s all I feel an intentional community is.  People living together, not just because they all happen to be in the same city or that rent is cheap but, because they intentionally want to live together.

In theory of course.  In theory.  It all looks good on paper and sounds nice.  But it’s all about finding the right people.  And I think in a city of a million people, I’ll be able to find 5 or 6 others who feel and think the same way I do.

This Tuesday we’ll be meeting with John from Our Land Organics for a landscape consultation. I hope to spend the majority of this consultation exploring ideas for the front lawn. The public face of the ecohouse, a thoughtfully designed front lawn will announce our ecologically conscious household and demonstrate alternatives in landscaping that improve property aesthetics and function.

The general plan is to see how many function we can stack into our front yard. I assume some balance must be struck between diversity/number of functions and the health of the whole system. On the far side of realizable goals, I imagine a community compost and seed depository accompanied by a little library. I’m considering the front yard to be a bridge into the neighborhood. 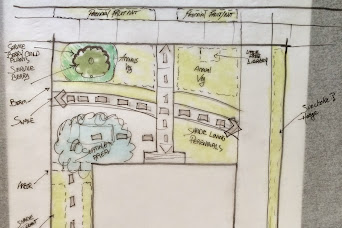 Update: John’s consultation and recommendations helped to give some form to our ideas for the front yard. The foundation of the design plan is a central swale/berm that follows the natural contour of our lot. This swale and berm will manage outflow from two downspouts on the front of the house, reducing the amount of runoff into the street. The contour of the swale will serve as a path from the driveway to seating area and provides a context to the front yard for further landscaping and new opportunities for interaction (people-people and people-landscape). This spring we’ll host a public landscaping party to begin implementing parts of the above plan – stay tuned!

I’ve spent the past few weeks seriously looking into how we’re going to get this house off-grid:  Producing our own electricity, finding a different heating source besides natural gas, and disconnecting ourselves from the water system.  It’s exciting and overwhelming all at the same time!  Let’s just talk about water:

The average American uses about 100 gallons a day (in Cincinnati we use about 85 gallons per day).  So, for a house of 4 people, that’s a total of 400 gallons of water used!  And less than 1 gallon is for drinking water.  How is that possible?  Who uses that much water?

I spent the better part of a year up in northern Maine and our source of water was a well equipped with a hand pump.  No way anybody pumped 100 gallons of water out of that thing a day!  You wouldn’t have anywhere to put it.  The most I ever pumped out at one time was to fill a 5-gallon bucket for doing my laundry.  Twenty more five gallon buckets?  Get outta here.

It turns out that most of that 100 gallons gets used up while we’re taking a shower.  Most shower heads use about 3 – 4 gallons of water per minute.  If you take a 10 or 15 minute shower, that’s anywhere from 30 – 60 gallons of water.  It adds up fast, huh?  While up in Maine, we’d go swimming in the river.

Purifying water from the Ohio River is an energy-intensive process:  Pumping the water.  Adding chemicals to coagulate the sediments.  Adjusting the pH.  And adding chlorine and fluoride.  Cincinnati is also fortunate to have an extra process which most other cities don’t:  using a giant activated carbon filter which helps to remove organics.  It’s essentially a massive Brita filter.  Why do we have one?  Because the Ohio River is so damn dirty.  The Greater Cincinnati Water Works also maintains 2 treatment plants, 24 pump stations, 33 storage tanks, and 3100 miles of water mains.  Lastly, they test the drinking water 600 times a day (which is way more than bottled water).

It’s all great that they do these things but I’m not into all of the coal and oil that is used for filtering water and maintaining the infrastructure.  I want to minimize my water footprint first and then eventually install our own water catchment and purification system.

Currently, here’s the things I’ve been doing to save water:

I’d say that none of the things that I’m currently doing has diminished my quality of life either.  I’m still clean and living the same life I have been with a few minor tweaks.  Everything’s great!  That’s all for now.  Next time I’m going to write about biosand and activated charcoal.  SWEET.

Today I mowed the lawn.  Hopefully it’s the last time this season!  And maybe forever – I found out that Cincinnati allows for native grasses to be planted in place of this short green grass which is commonplace.  I’m excited to tear up the lawn next spring and sow some Cincinnati grass wherever we won’t be expanding the garden!

I also harvested the broccoli (yes!), cleaned the garden up, and threw down some green manure which will hopefully take hold before the frost hits.  Then I got to meet the new neighbors across the street.

Planting, harvesting, and meeting new neighbors all in the same day.  Hell yes.

As we begin the process of revamping this charming turn-of-the-century house into an off grid community-oriented home, all sorts of theoretical and pragmatic questions are raised: Which water collection/filtration system is going to work best through the winter? What are the city/county/state laws in regards to drilling a well? How does a hammer work? But I continue to research and ask questions and slowly the questions become settled.  I realize that they won’t be fully answered until each respective project is individually seen through.  I’m comfortable with this long path full of learning opportunities which we’ll be living and working in knowing that so long as we keep on truckin’ we’ll get there.

Currently, we’ve been preparing the house for winter: putting plastic over the windows, replacing weather strips, and raising the median house temperature by expelling a lot of hot air as we go on and on about all the low-energy and highly-sustainable actions we’ll be bringing to the house and Cincinnati. For now though, I’m mostly figuring out what’s going on with this hammer situation.

The Earnshaw Ecohouse currently has one open room. Click here for more info about living in the house and to begin an application.